KIDS WHO SIDE WITH THE ABUSER, PART 1

Several weeks ago, I wrote a post about kids who see through the abuser. To my surprise, it was the most popular piece I’d put up in a long time; a lot of my readers are trying to see through kids’ eyes. How do young people form their understandings of what is happening when their father (or step-father) abuses their mother? And how can they learn to see through the abuser’s lies and manipulations?

In the discussion that grew out of that post, many mothers shared their stories of children who weren’t seeing through the abuser. Unfortunately, that experience is a common one also. I’m going to examine some of the reasons in this post, which will be in two parts.

(In order to keep my language as simple as possible, I’m going to refer to the abuse perpetrator as a “batterer,” even if his abuse is almost entirely about emotional battering rather than physical or sexual violence. I’m using this term because I’m discussing homes where the primary source of trauma to the kids is Dad’s abuse of Mom, not either parent’s abuse of them directly — which is a different subject.) 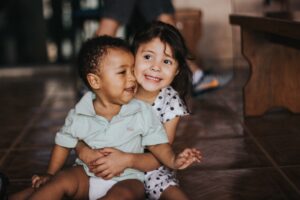 1) The pursuit of safety

Kids who grow up around domestic abuse are afraid. The primary thing they live in dread of is the next time that their father will verbally rip Mom to shreds. They hate watching that happen; people who haven’t lived it tend to underestimate how awful these incidents are for kids. For most kids living with a batterer, the number one source of their trauma is this accumulation of acts of psychological cruelty towards their mothers that they’ve had to witness.  It eats them up inside to watch Mom sent into misery and robbed of her dignity over and over again.

If he becomes physically frightening at times – as most domestic abusers do – then the kids have all of that additional fear. And as with his cruelty and verbal abuse, the kids usally worry about Mom most of all, since she’s his favorite target. But they worry about all of it.

So kids are scrambling internally, desperate for emotional – and sometimes physical or sexual – safety. And there’s no safe place to stand, so they tend to keep trying different positions over the years, hoping to find a good one. 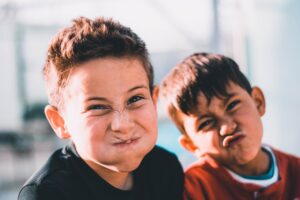 Position 1: Side with Mom

There are two key advantages on this side. First, you have the emotional benefits of feeling closer to Mom, and in a home where Dad is a batterer she’s your key hope for nurturing and genuine comfort. (As opposed to the self-serving, manipulative form of comfort that comes from the abuser).

Second, you feel better because you know you’re doing the right thing. Kids care a lot about right and wrong, and about fair and unfair, from a very young age. Standing against injustice matters to them. On a deep level, kids feel better about themselves if they stand with Mom.

But there are also costs. The abuser stops giving you much attention when he perceives your bond with Mom, and may be target you for outright insults and other mistreatment. It hurts to be on the outs with him, especially because he’s the one with the power. (Abuse creates a huge power imbalance in the abuser’s favor.) He’s the one who determines who gets which freedoms and privileges; he can make your day go well or terribly. Plus he may shame you about being close to Mom, and if you’re a boy he may call you a Mama’s Boy.

If any of your siblings are allied with the abuser, they start to look down on you. You’re a Loser, siding with Mom; Dad is the cool and powerful one, Winners side with him. 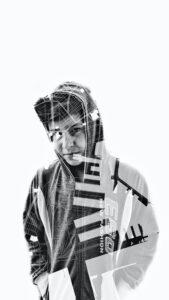 Position 2: Side with the abuser

So at some point you’re likely to try standing here. Now you’re linked to power, which feels good; that’s why kids try to be accepted by the Cool Crowd at school. Some concrete things are likely to go better, because Dad isn’t targeting you. More freedom, more privileges. You’re feeling less afraid for yourself (though you may still worry about Mom or your siblings); if Dad gets scary or violent, you know it’s not likely to be directed at you.

And on a superficial (and therefore addictive) level, you’re feeling good about yourself. You’re a Winner now. And that burning pain of witnessing injustice starts to ease up, because when you’re on Dad’s team you get to decide that Mom deserves what she gets. What a relief.

But there are also losses. You miss feeling closer to Mom, and you long for her nurturing and affection. She hasn’t necessarily withdrawn those things from you – she’s much less likely than the abuser to reject you for being on the wrong team. But you’ve done the withdrawing yourself, because you can’t be in good with the abuser if he sees that you’re still deeply connected to Mom.

Plus, there’s a problem brewing with that superficial feeling of being on the Cool Team; on a deeper level, perhaps unconscious but rumbling somewhere down inside, you know you’re on the side that’s mean and selfish. You know that this side is wrong, that’s it’s unjust. And you’re beginning to hate yourself for being on the wrong side.

Position 3: Stand in the middle

Because both of the positions above come with high prices, at some point you’re likely to try seeing if you can be on both sides’ good list. You’ll remain close to Mom, but try hard simultaneously to win Dad’s approval. You butter him up, cater to him, and see if you can craft yourself into the kind of person he seems to like. When he’s getting nasty, you try to get Mom to give into his bullying, because that will keep the peace. You see if you can mediate their conflicts, see if you can be a third adult in the house. You’ll try to sneak in your cuddly times with Mom when the abuser isn’t around or isn’t noticing.

And for periods of time this may appear to work fairly well.

But here, too, there are serious problems. The stress is overwhelming; your insides are likely to be twisted with anxiety. You’re trying to stay aware of both parents’ moods and desires, anticipate problems before they arise, and watch out for your siblings’ well-being as well; the way to keep the peace is to keep everybody happy. That’s an overwhelming load. Your childhood is disappearing into trying to parent the whole family.

Plus, the abuser isn’t always satisfied with the way you’re catering to him; there are times when he requires your outright loyalty and demands that you participate in rejecting and demeaning Mom. (He won’t say these things aloud, but he’ll make it painfully clear what you have to do to avoid being put back on the bad list.)

As you can see, there’s no great place to be. Kids who witness abuse try out all three of these positions, and stay in them for varying lengths of time as they experience the advantages and the wounds of the spot they’re occupying. 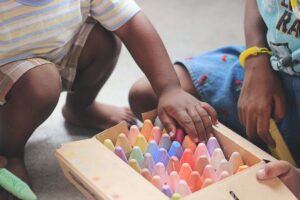 I referred to this above, but I want to go into more detail. Adults in general, including people in the helping professions, tend to greatly underestimate how deeply children feel the pain of injustice. There is a highly mistaken — but widely held — belief that children are self-focused, and therefore they experience the world primarily in terms of how things affect them personally. This view leads to the erasure of huge portions of children’s inner experience, including some of their deepest pain. Kids hate seeing people suffer (and hate seeing other animals suffer). Their hearts, in the emotional sense, are no smaller than adult hearts. And kids get super upset when they perceive unfairness happening to anyone, not just to them personally. And if that cruelty or injustice is happening to someone they love, it eats them up inside.

What’s more, children experience their mothers almost as extensions of themselves. So when she is being treated wrongly, they feel that pain both as a wrong to her and as a wrong directly to them. It hurts them double.

In this context of severe distress, it becomes potently tempting to kids to decide that Mom is largely, or even primarily, at fault for what’s being done to her. If they choose to see it that way, they can relieve some of that intense pain, because if she deserves it then it isn’t injustice.

And the abuser never stops reminding them – without saying it directly, of course, but he always has ways to get his messages across – that this escape path is open to them. His unspoken message is, Look at me, I don’t feel your mother’s pain, so you don’t need to either. Just join me and you’ll be away from all that.

This relief comes on top of all the other benefits of siding with the abuser.

So notice this striking point: one of the main reasons why kids side with the abuser is because they’re in so much pain about what he has done. This appears contradictory on the surface, but when you use your imagination to put yourself in the child’s position, it starts to make sense. And it helps to explain why some kids who have been allied with Mom for years will abruptly – and heartbreakingly – pop over to the dark side, a topic I’ll come back to.

In Part 2 of this post I’ll look at several other reasons why kids can end up on the abuser’s team. And we’ll look at ways to help them find their way back to Mom.

Photo by Ernest Brillo on Unsplash  (teens lined up)

Photo by Nick Nice on Unsplash  (teen in hoodie)

Photo by Patty Brito on Unsplash  (brother and sister)

Photo by Tina Floersch on Unsplash  (kids with chalk) 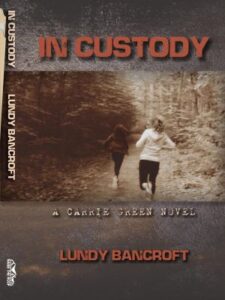 Lundy’s new suspense novel, In Custody, takes on the anti-mother bias and corruption driving the family courts today. A young journalist sets out to investigate the disappearance of a mother and her daughter, and she stumbles into a dark world of intimidation, profiteering, and legal abuse — and finds herself in danger. 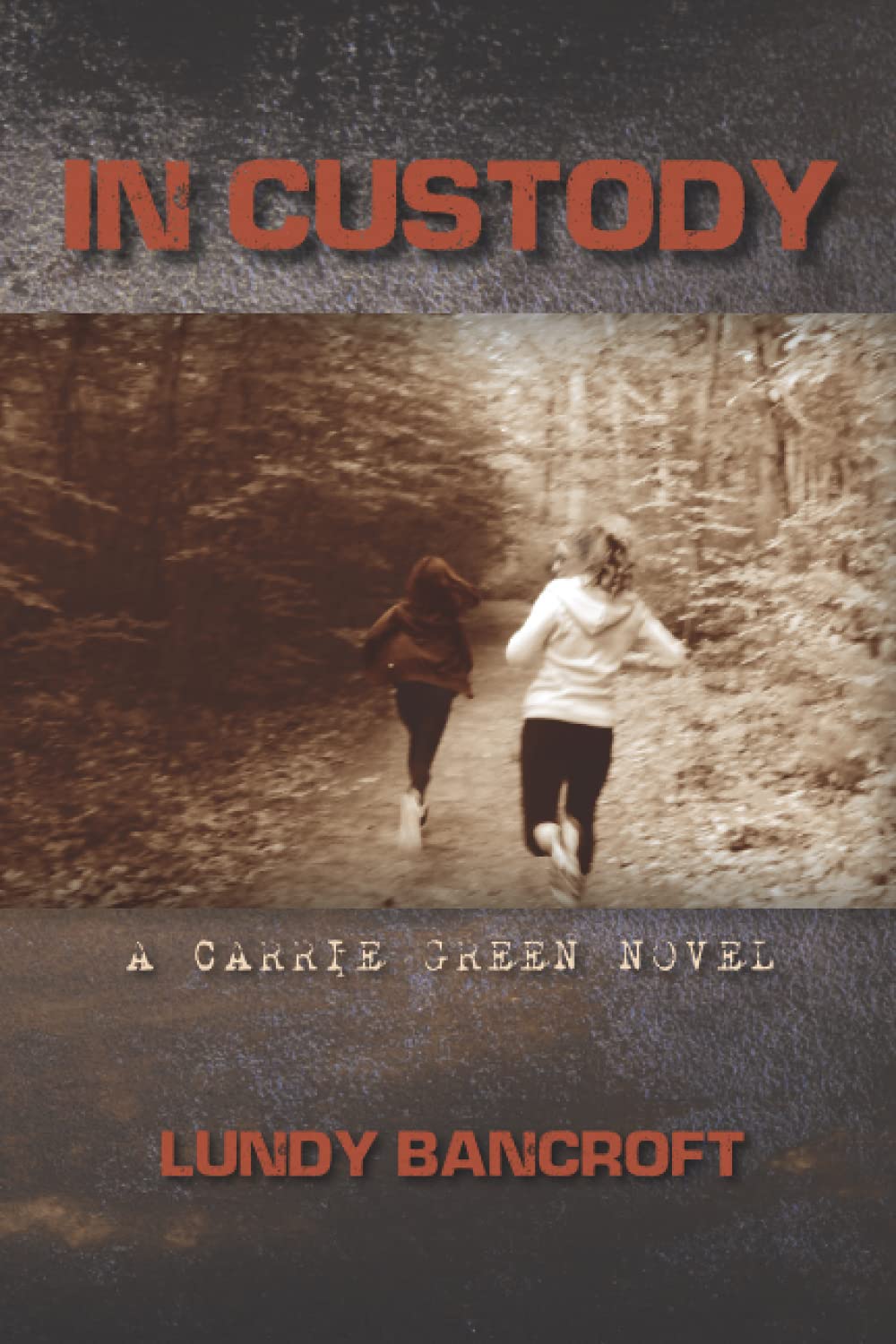