How He Gets You Back 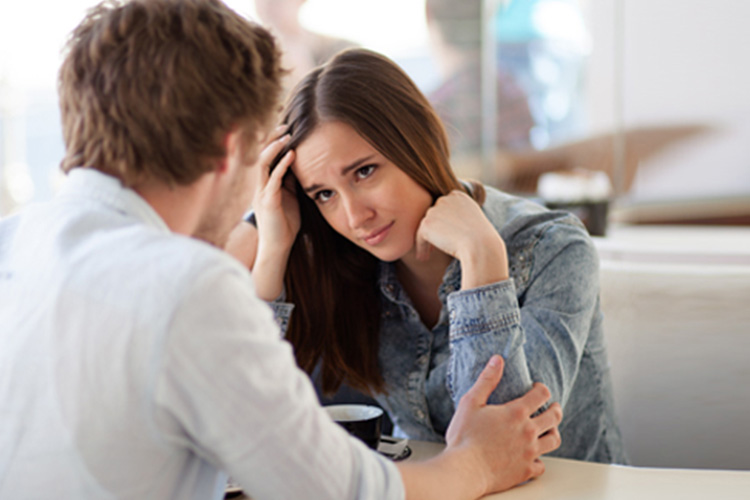 If you’re considering leaving an abusive or controlling partner — or if you’ve already done it — it’s important to prepare yourself mentally and emotionally for the tactics he’s likely to use to try to lure you back in.

Even though it’s very hard to leave an abusive partner, the tough reality is that staying away from him is often even harder. You can increase your chance of succeeding by getting ready for what’s coming.

You can pretty well count on it that he’ll try at least one of the following maneuvers, and maybe all of them:

He acts helpless and victimized; he stops eating, stops taking care of his appearance, doesn’t go out to do anything, and sends you the message (whether in words or just through his actions) that he can’t live without you. He makes sure that other people know how devastated he is and how much he loves you.

Here are some things to tell yourself if he acts this way:

1)  You couldn’t make him happy before, so why on earth would you be able to make him happy now? As soon as you’re back together, he’ll only see what’s wrong with you.
2)  Your life cannot and should not be sacrificed to his. In fact, his whole abuse problem comes from the fact that he believes your should give up your life for him. So the whole message that he’s giving you now — that you should be with him even though you really don’t want to be — is the perfect indication that he hasn’t changed at all.
3) If he kills himself (which is extremely unlikely — abusers rarely carry through on threat) it will be very sad indeed. But if you go back to him, then you’re killing yourself (in effect), so that wouldn’t be any better.

If he’s threatening suicide, the most important danger to be aware of is the danger to you, not the danger to him. Abusers who threaten suicide sometimes carry out very violent acts against the woman. So work with a hotline on making a safety plan for yourself, and make your own well-being — and the well-being of your children if you have kids —  your highest priority.

He quickly gets involved with someone else, and seems to treat the new partner like gold.

It’s hard to stay strong in the face of this routine. Remind yourself that it’s totally fake — this is how he was toward you in the early days also, right? And this is even more fake than that; he’s quickly collected this new partner precisely to hurt you and to make you tempted to get back with him.

He’s using her. And before long she’ll start to be the target of his abusive behavior herself.

He doesn’t let you get any space from him. He calls or texts constantly, saying he “just wants to talk,” or saying, “I know it’s over but I just want to be friends.” He’s perhaps also manipulating friends or relatives into pressuring you by making them feel bad for him.

Remind yourself that the fact that he refuses to respect your limits and boundaries is a big part of what his problem is all about. If he really cared about you the way he claims to — instead of just caring about himself — he’d give you the space you need.

He’s not acting this way because of how much he loves you (I hate to say it, but it’s true); he’s doing it because he so desperately wants to control you, and because he thinks he owns you.

He gets scary or intimidating, showing up places unexpectedly or making threats or spreading lies about you. But, through his twisted way of thinking and behaving, he says he’s doing these things because he loves you so much.

My comments to the last point pretty much cover this one too. Call a hotline — in fact do so often — to get frequent support and to strategize about how best to stay safe from him.

Remember, abusive behavior is never a sign of love; it’s a sign of selfishness, of an ownership mentality, of entitlement, and of a propensity for violence and power.

He acts sweeter than he has in a long time, he seems very changed, he stops drinking, he says he’s really serious about treating you better this time. And it seems like he really means it.

And maybe he genuinely does mean it. But the thing is it won’t make any difference. Abusive men who make serious, heartfelt promises to change don’t follow through on those promises any more than abusers who make fake promises do.

If he’s really serious about changing, he’ll accept a three-to-six month period of no contact with you, during which he will:

— remain single, and do so even if you’re dating
— not say anything bad about you to anyone
— not tell you that you need to look at your part in it all
— not make any excuses to talk to you or send messages
— get himself into an abuser program if there is one anywhere around
— accept it if, at the end of that period, you still don’t want to get back with him, and not give you any verbal abuse about that

If he violates even a single one of these you can be certain that he isn’t serious about changing, so then there’s no need to put any more energy into wondering whether he is or not.

Get yourself ready for him to pull this stuff, and your chances of succeeding on getting free will be much better. The key question isn’t, “Is he going to change?”  It is, instead, “What kind of life do I want to live, and how do I get there?”